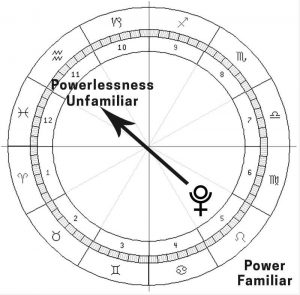 “The below information is inspired by Jeffery Wolf Greens  extensive work on evolutionary astrology. This along with the Gene Keys profile can give great clarity on the souls intent for this life .Aligning  the personality with the Souls intent is tremendously relaxing.”  Andrew

Pluto represents simultaneously the evolutionary intent of the soul and the deepest unconscious security needs.

Security can be translated as power.

Evolution because it is unfamiliar could be translated as powerlessness.

This swinging between power and powerlessness is a Plutonium experience for all human souls.

You can list in your life where you are most focused on this duality of feeling empowered by the familiar and dis-empowered by external experiences that take you away from the familiar, this in itself can be very revealing.

Because your being asked by life, (evolution) to include something into your experience that is not familiar. See if you can look back over your life and see the archetypal pattern

Pluto is also deeply related to the nature of desire. As Souls projecting into personalities we have 2 types of desires.

Type 2 Desires. Desires that are originating from the soul to connect back with source. To empower the soul to realise its oneness with all.

In my experience our soul does not want our personality to renounce the past as it has learned a lot but the soul does want us to evolve towards that which is not familiar and to be aware of how and why we unconsciously attach to the past.

Part of the evolution of the soul is to recognize that we have already been exploring Pluto’s, house sign and aspects for many lifetimes. The soul consciousness operates outside of linear time so we are in effect living multiple lives simultaneously. (its irrelevant if we accept reincarnation or not)

Pluto in Leo or the 5th house or in aspect to the Sun could represents an unconscious security desire of the personality to feel empowered by being in a position of authority and being the creative center and light of its own universe. The soul has experienced a more egoist-self king or queen orientation and it feels very familiar and unconsciously gives a feeling of security by repeating this over and over. Especially when we are under stress we will always unconsciously revert to this behavior .

A great way of observing this is what sorts of thoughts and emotional experiences do you have when you face the unknown, looking at spontaneous repetitious self talk here can be enormously enlightening

The point 180 degrees opposite Pluto shows the evolutionary trajectory of the soul in this case Aquarius where the group and detached humanitarian evolutionary point is given more priority then the individuals own sense of creative uniqueness.

This person will be very comfortable being in a position of absolute leadership and is being asked to step into the unknown and surrender his compulsion with his own sense of pride and align more with the group consciousness. If the personality as extension of soul has awareness and understands this trajectory of evolution the personality can watch and be aware of this polarity play out. and actually consciously make choices in the evolutionary direction.

Eventually this person will bring a unique creativity (the King or Queen archetype) that only exists to serve the whole to groups and the service of humanity, The identification with the past will no longer be claimed by the ego as a place of security but as an evolutionary gift from life to enhance the Aquarius group consciousness.  Additionally the house position of this point would also play out as the area where this Aquarian evolution would stage.

My approach to Astrology is based on Evolutionary Astrology, I do not give you more information for your mind I assist you in seeing and Read More